This has been a long journey. The series is really only one book that is divided up in
6 parts. It is a day by day account of what it took to build the US Third Army under
General Patton in World War Two. It is written in the words of those who were
there and offers an insight as to what really happen and what Patton really about
those that served both above and below his rank of General. It is a fascinating
journey as it has Patton’s thoughts as he put it down at the end of each day in his
diary, which has never before been published. Woven around his diary are the
thoughts and words of the eyewitness to the fight that were part of Patton’s staff
and those superiors above him. This is by far the hardest endeavor mentally I have
ever engaged in. The massive files of the Patton Papers housed in the Library of
Congress contributed to a great portion of the book. This is the book I feel General
Patton would have written had he lived to write it. He had started on it but after his
death, the book that bore his name was heavily didactic to protect his children by
his beloved wife Beatrice. There feared with good reason what Eisenhower would
do if the truth were told. They two daughters were married to career solders and his
son had just graduated from West Point. Had General Patton wrote this book his
family would have suffered. 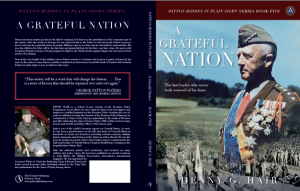 One of the series of 6 books published by Denny Hair about General Patton.

On a personal note to those who read this. This is not an easy read because it has so
much detail to it. It’s the type of book(s) that tell the truth and that takes a lot of
research and attention to detail. I spent 31 years as a Houston Police Officer and
part of the time was manning a crime scene unit. I was dispatched to several
hundred homicides and worked with some of the finest detectives you would ever
want to know. They were the best of the best. They taught me to question
everything. You must ask yourself the who, what, where and how of any
investigation. So for ten years I asked those questions. What I discovered was that
Patton had left hundreds of clues in his diary as to what was really going on. By
developing a timeline on a day by day bases, as any homicide detective would , the
truth of what General Patton wanted known came out. He could not say it directly
but he could say it in his diary. I then collaborated it by direct testimony and eye
witness accounts. It had to be footnoted and have good bibliography sources. These
point to the witness testimony of the facts.
The title “Hidden in Plain Sight” was coined for the series because the clues were in
plain sight but hidden in dusty files and like the pieces of a puzzle that are all there
but not in the original box. You can’t see what the image will look like until you get
all of the pieces put where there are suppose to go.
In book six the images uncovered are exhibit A as these are the images that were
hidden in the Patton Papers for all to see, yet hidden from view until now, but in
context to the text of the other five books.

Casey Sill administrator
Prev post
Greetings Tankers! Project38 is going to build a tank. A rowdy crew of engineers, historians, reenactors, builders and
Read More 0
By: Will Moul Putting together your own K rations for consumption sounds like a fun and cheap way
Read More 0
Does anyone remember ‘Reenactor Parking?’ I used to love those comics, I think I actually printed a couple
Read More 0
It takes all kinds, as the old saying goes. WWII reenacting is no different. Many kinds of people
Read More 0
Christmas money can be spent any way you want. I was at a tattoo shop today and the
Read More 0
Authenticity. Some folks have it, and they’re assholes that go out of their way to demean other reenactors
Read More 0
We posted an article on the MTL blog about a month ago telling everyone why we think cold
Read More 0
I had lunch with a small group of reenactors last weekend. The conversation was usual reenacting banter, who’s
Read More 0
If reenacting was a religion, and some would consider it to be, the battlefields of Europe would be
Read More 0
Every war movie released since 1998 has been dubbed “the best war film since Saving Private Ryan.” “Hacksaw
Read More 0