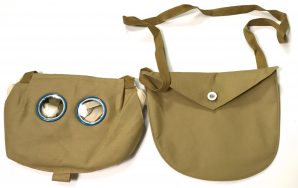 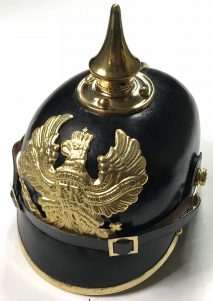 The French M2 Gas mask was a French made gas mask used by French, British and American forces from April 1916 to August 1918 during. The M2 was made in large quantities, with about 29,300,000 being made during the war.
The M2 mask was designed by René Louis Gravereaux of Paris in 1915. This 2nd model was introduced in April 1916 was produced with two separate eyepieces, so folding it would not cause damage like the MK1. British forces were issued 6.2 million units of the second model between May and November 1916 and used it as late as August 1918.
The US Army issued its soldiers the British-made Small Box Respirator to protect against Gas attack, and also the French M2 gas mask in case a mask had to be worn for an extended period of time.
The M2 gas mask is newly made so is safe to wear by adults or children as no asbestos is present.
comes complete with rubberised bag.