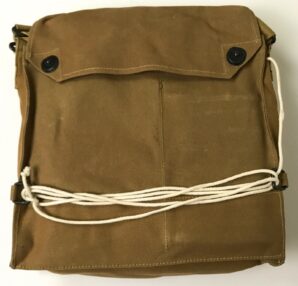 Of the 5,250,000 gasmasks of all types produced by the U.S. during the war, 1.6 million of them were the improved version of the British SBR. This mask was officially known as the U.S. Corrected English Small Box Respirator or the U.S. Corrected English Model (CEM). Produced in six sizes (1 through 6) from January to March 1918, the CEM was one of the two most commonly worn American made gasmasks used by the AEF. The second most common mask was its successor, the U.S. Richardson, Flory and Kops Respirator (RFK).
Despite complaints from France regarding the British SBRs uncomfortable mouthpiece and its despised hated nose-clip, American gas experts determined that this type of respirator provided the best protection. Ever since the failure of the ASBR, American gasmask designers toiled to modify, improve, and ultimately make the American version of the SBR more comfortable, more reliable and stronger than the English mask that it mirrored. After numerous revisions, by October of 1917, the design had been perfected. Upon passing a comprehensive battery of field tests, the CEM respirator went into full scale production in January of 1918. It would be the very first U.S. made gasmask to see service in the gas soaked trenches of the Western Front.