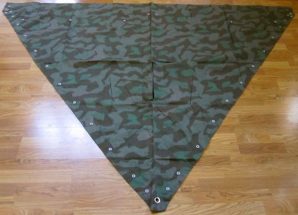 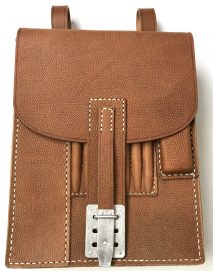 Reproduction of the shelter quarter that was standard issue to all German troops of the Heer (Army), Luftwaffe, and Kriegsmarine. (Waffen SS troops also used them occasionally.) The Zeltbahn could be worn as a poncho, used individually as a ground sheet to make a lean-to, or, most often, four were buttoned together to make a pyramid tent. However, they were made in a such a way that literally any number could be combined to make larger and larger tents. Both sides were printed in the same “Splinter” pattern camouflage, with one side being notably darker than the other to fit varying light conditions in the environment the troops were operating in.