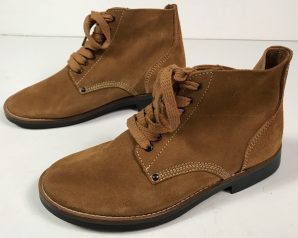 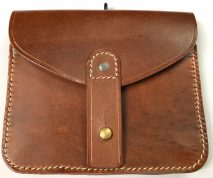 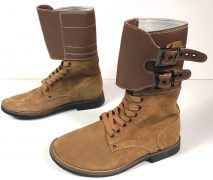 Officially called “Shoes, Service, Reverse Upper”.
These pattern combat boots where introduced by the US Army in June 1943 and where the standard boots issued to the US Infantry. They would have been worn during training in England and during the D-Day invasion in Normandy in June 1944.
The roughout boots where the standard footwear for the US Army in World War Two and gain there name from the fact that the leather uppers are reversed so that the “flesh out” side (the rough side) is on the outside and the smooth leather is on the inside.
The roughout boots where worn with the M1938 canvas gaiters. These service boots with reverse uppers could be worn with the likes of the HBT trousers and the M1937 wool trousers around camp, in the field, in combat and as part of the A class uniform.
These are the style of boots that you need for your Normandy impression.
The “Combat Serviceable” roughout boots feature: Reversed flesh out (roughout) leather uppers. Lace up ankle boot.  Sole is stitched and glued on.  Heel is glued and nailed on.

Width: Our boots are made on an “E” (wide) last. If you have extra narrow feet, an insole and thicker socks may work. For extra wide feet you can try going up a size.