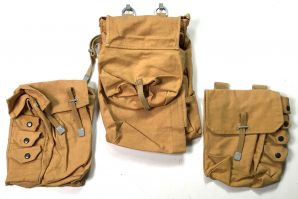 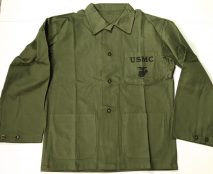 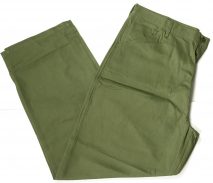 A faithful reproduction of this very rare German WWII Pioneer Assault Pack Assembly adopted by the German Army on March 27th, 1941. These pack assemblies consisted of a backpack hooked onto the standard belt support straps (Y straps) with two side pouches; to be worn in place of, or in addition to, ammunition pouches.

The Backpack is a high rectangular pouch with top flap being a special Mess Kit pouch with a strap and friction buckle for securing it down. The front of the backpack has two large side loading compartments intended for demolition charges, grenades etc. The Pack has D rings (4) sewn on the rear for suspension from supporting straps. In addition, there are two side pouches designed to be worn on either side of the central pack. The left pouch was intended for additional explosives and grenades in two compartments. Both pouches have a series of four vertical rifle ammunition pouches intended to carry ammunition in stripper clips. The right side pouch, with only one larger compartment, was intended for the Gas Mask; not included but available separately. Each side pouch has belt loops to secure the set at the waist. Complete wit replicated stamp markings on the interior, this is a very scarce set used by Special Forces of the German Army during WW2.