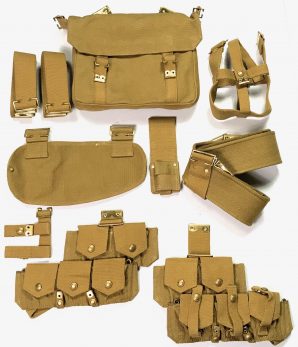 The British were the first European army to replace leather belts and pouches with webbing, a strong material made from woven cotton, which had been pioneered in the United States by the Mills Equipment Company. The P-08 Pattern Webbing equipment comprised a wide belt, left and right ammunition pouches which held 75 rounds each, left and right braces, a bayonet frog and attachment for the entrenching tool handle, an entrenching tool head in web cover, water bottle carrier, small haversack and large pack. A mess tin was worn attached to one of the packs, and was contained inside a cloth buff-colored khaki cover. Inside the haversack were personal items, knife and when on Active Service, unused portions of the daily ration. The large pack could sometimes be used to house some of these items, but was normally kept for carrying the soldier’s Greatcoat and or a blanket. The full set of 1908 webbing could weigh over 70 pounds when fully loaded.

Set compromised of the following:

When the First World War broke out, the British infantryman wore the best set of field gear of all the nations in the conflict. Its official name was “Pattern 1908 Web Infantry Equipment,” often abbreviated in Army documents as the W.E. 08.

The Royal Army was very enthused when they introduced the new gear. The manual says:

(A) The component parts of the equipment are all directly connected together.—The result of this is that the whole of it can be taken off in one motion, and … remains intact and ready for putting on again at a moment’s notice.

(B) The equipment is perfectly balanced.

(C) There are no straps crossing the chest.

(D) Flexibility of the equipment.—the articles carried by the soldier can be disposed in a variety of ways.