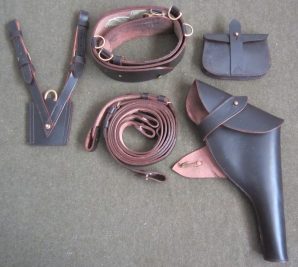 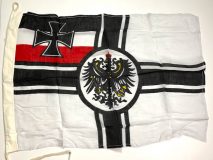 The Sam Browne belt is a wide belt, usually leather, supported by a narrower strap passing diagonally over the right shoulder. It is most often a part of a military or police uniform.

Sam Browne VC was a British army officer serving in India in the 19th century. In those days officers always carried a sword into battle. It hung from a small metal clip on the waistbelt, called a ‘frog’. However, the scabbard tended to slide around a lot when they charged the enemy, meaning that it had to be steadied with the left hand before being drawn.

During the Indian Rebellion of 1857 in India, Captain Sam Browne was serving with the 2nd Punjab Irregular Cavalry. On 31 August 1858, Captain Browne was involved in the fighting near Seerporah. As he charged a cannon being reloaded, he was attacked by one of its crew. Browne received two sword cuts, one on the left knee and one which severed his left arm at the shoulder. He survived the injuries but, without a left hand, he found that he was now unable to control or draw his sword.

Browne came up with the idea of wearing a second belt which went over his right shoulder and held the scabbard in just the spot he wanted. This would hook into a heavy leather belt with “D-rings” for attaching accessories. It also securely carried a pistol in a flap-holster on his right hip and included a binocular case with a neck-strap. Other cavalry officers in the Indian Army began wearing a similar rig and soon it became part of the standard uniform. During the Boer War, the rig was copied by Imperial and Commonwealth troops and eventually became standard issue.

Infantry officers wore a variant that used two suspender-like straps instead of the cross-belt. It was supposedly invented in 1878 by Lieutenant Sir Basil Templer Graham-Montgomery, 5th Baronet of the 60th Rifles while serving in India. There has been a great deal of discussion as to whether Browne modified Graham-Montgomery’s design or vice versa. Since there were no patents issued for either design and both camps have accounts backing up their claims, it may never be decided.

In the 20th century it was a mainstay in the British Army officers’ corps, being adopted service-wide in 1900 during the Second Boer War after limited use in India, and later becoming popular with military forces throughout the Commonwealth.

After World War II the Sam Browne belt saw a decline in use in the Commonwealth. It was dropped from the standard officer’s uniform in 1943. However, officers, and Warrant Officer Class 1 (but not WO2) of the British Army and Royal Marines still wear it in formal (No.2) dress and in some versions of full (No.1) dress.