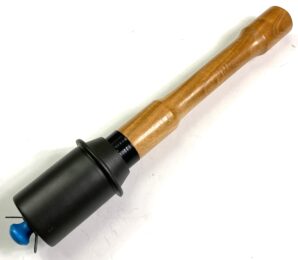 This M1943, M43, or Stielhandgranate 43 that is almost impossible to tell from an original. The M43 was a simplified version of its predecessor the M24 for mass production. Essentially it was an egg grenade fixed to a drilled wooden handle for easier handling and longer throwing distances.

In WW2 the stick of the German M43 (Model 43) grenade provided a lever, significantly improving the throwing distance. The Model 43 could be thrown approximately 30 to 40 yards, whereas the British Mills bomb could only be thrown about 15 yards. The design also minimized the risk of the grenade rolling downhill back towards the thrower when used in hilly terrain or in urban areas. These grenades were extremely useful for clearing out entrenched infantry positions.

would be scattered on detonation, making the grenade more effective against personnel.