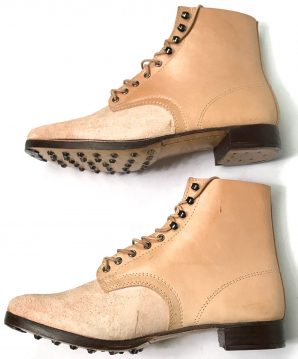 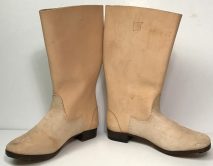 The German military had issued ankle boots for most of the 20th Century, until 1942 the Jackboot (Marschstiefel) had been the primary field boot. As the War wore on, the low boots began to replace them in order to save leather. By 1944, Low Boots (normally worn with Gamaschen) were the most common footwear in most units of the German Armed Forces.

The Low Boots were issued to the troops in Natural leather- some soldiers opted to polish them black, while others left them brown. It appears that polish (rather than dye) was used to color them, so many worn originals that appear black will actually show brown color coming through.

HAND MADE IN GERMANY!