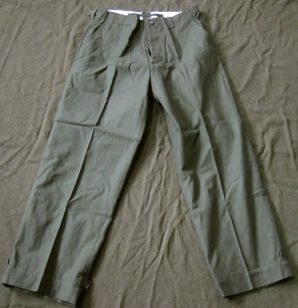 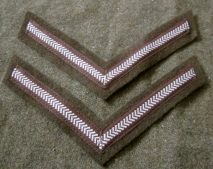 History: The M1943 Field Uniform was the result of several years of experimentation and development by the US Army Quartermaster. It replaced the completely inadequate M1941 Field Jacket (which was more suited to a day on the golf course than combat in the ETO.) It consisted of a 4 pocket jacket and matching trousers made from windproof sateen cotton. The uniform was designed as a layered system, meant to be worn over the wool shirt and trouser and in conjunction with a wool sweater and liners in colder weather. The uniform was first issued to elements of the 3rd Infantry Division fighting at Anzio in Italy in February/ March 1944 for field testing. Despite the high praise the jacket received from those who wore it, General Omar Bradley considered it unsightly and inferior to the wool overcoat. Resistance by Bradley and other commanders in the ETO resulted in the uniform not being issued until shortages of all field jackets finally forced them to relent in the Fall of 1944. The supply situation for clothing for troops already in the ETO was described as “critical” and “very critical” until the end of January 1945. (Shipments of ammunition, fuel and food took precedence over clothing). Thus, troops fighting at Aachen, Hurtgen and the Battle of the Bulge will be seen wearing a mix of M41’s, Tankers, M1943’s and wool overcoats. The exceptions to this were the 101st and 82nd Airborne Divisions who were almost entirely re-equipped with the uniform just prior to operation “Market Garden” and troops in new units coming from the US. By February 1945, most troops in the ETO had finally been re-equipped with the new uniforms.
Trousers will have a length of approximately 35″. 100% Cotton.

PLEASE NOTE: THESE ARE A DROP SHIP ITEM, IF I DON’T HAVE SIZE ON HAND, USUALLY TAKES 2-3 WEEKS FOR DELIVERY