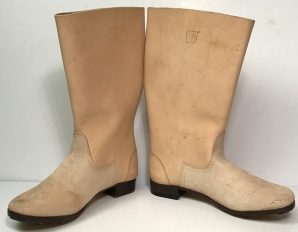 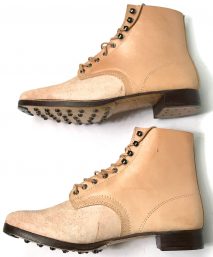 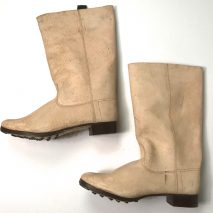 M1939 German Jack Boots with hobnails. These leather Marschsiefel come complete with hobnails and heel irons. They have rough-side-out leather on the toe and flesh-out leather on the shaft. Depending on the size, shafts have a 17-18 inch cumference and are 13-13.5 inches tall.
FEATURES:
100% NATURAL LEATHER
ORIGINAL WWII GERMAN MADE NAILS
CUSTOM GERMAN MAKERS STAMP
WOODEN PEGGED

HAND MADE IN GERMANY!

The calf-high pull-on jackboot had been the traditional footwear of the German soldier for generations. The Wehrmacht boot was little different from that of World War I: made of brown pebbled leather (blackened with polish), with hobnailed leather soles and heel-irons. Trousers were worn tucked inside. Originally 35–39 cm tall, the boots were shortened to 32–35 cm in 1939 in order to save leather. By 1940 leather was becoming more scarce and issue was restricted to combat branches, and in 1941 jackboots were no longer issued to new recruits. By late 1943 production of jackboots had ceased altogether. However, as late as fall 1944 depots were encouraged to issue Marschstiefel to infantry and artillery, to the extent they were available.

Officers’ boots were knee-high and more form-fitting, and (as usual) often private purchases of superior quality. They were to be worn with breeches; however, these technically were not “riding” boots, differing somewhat from the Reitstiefel worn (with spurs) by regiments with cavalry traditions.By order dated 31 October 1939 most officers in the front lines wore the shorter EM boots with Langhosen or Keilhosen, but some ignored regulations and wore their kneeboots anyway.