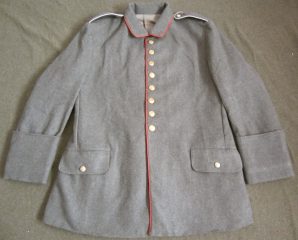 HAND MADE TO ORDER: PLEASE ALLOW 6-8 WEEKS FOR DELIVERY.

This jacket (also called the “Transitional” tunic by collectors), a simplified version of the M.1907/10 Waffenrock. This jacket almost immediately started appearing as the M.1910 was too complicated for wartime production. Actually, so was this model and the M.1915 Model called “Die Bluse” was already in the works, but took al ong time to actually start replacing the earlier models. Unlike American practice, the Germans wore all 3 models at the same time — they issued what they had in a wartime economy.

The cut of this jacket, like the M.1910 is still somewhat close-fitting; the tone of the field grey cloth became darker and greener (more towards what we now think of German “field-grey”, but that is a misnomer as the German’s colour pallete was all over the place).

The fancy cuffs and false skirt pocket flaps were now omitted. The cuffs themselves became a deeper ‘Swedish’ style; and the NCO’s braid was ususally now only displayed on the collar.

The shoulder straps of field-grey cloth were now piped in white for all infantry formations, with unit numbers or monograms embroidered in red; the straps were now sewn down at the shoulder seams.

NEED A DIFFERENT SIZE?CUSTOM CAN BE ORDERED