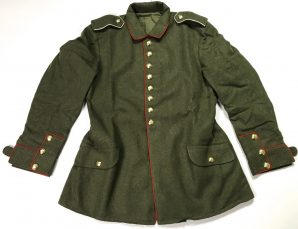 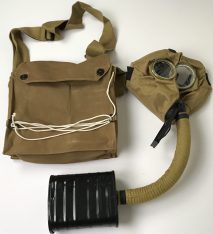 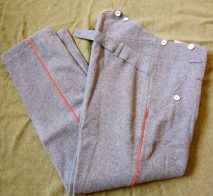 HAND MADE TO ORDER: PLEASE ALLOW 6-8 WEEKS FOR DELIVERY.

The M19-7/10 Feldrock was the pre and early war tunic used by the German Army. This tunic  was the primary issued tunic at the start of the war. It can still be seen in use well into the last days of WWI.

Made in  feldgrau cloth, fastening with a single row of eight buttons whose type of metal and design varied according to the regiment. Pre- and early war, the buttons were issued in a laquered finish, either gold or silvered, not in polished brass as supposed. Some Lander had their own pattern, such as the most-common Prussian Crown or the Bavarian lion pattern.

Most infantry regiments had the turned-down collar, the front edge, and the simulated three-button pocket flaps in the tails were piped red.

The feldgrau Achselklappen (shoulder straps) were detachable and piped in a color that identified the army corps to which the regiment belonged, also bore a red number or monogram identifying the regiment.