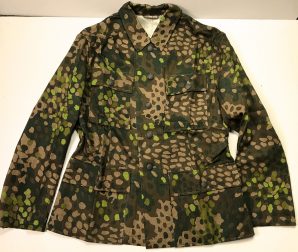 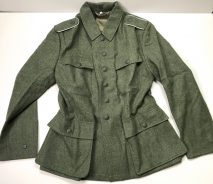 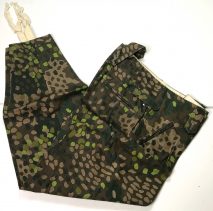 In early 1944, the Waffen-SS SS introduced a new uniform, meant to replace the pullover camouflage smocks as well as extend the service life of the wool uniform. It consisted of a tunic and trouser, very similar in pattern to the M43 wool uniform. The camouflage pattern was dubbed “Erbsenmuster” or DOT 44 and was meant to be used in all seasons, dispensing with the need for the reversible uniforms.
The new uniform was produced on a variety of linen, cotton, and rayon fabrics. Numerous shade variations exist, though this was a factor of erratic printing quality rather than any intentional alterations to the pattern.

Uniforms produced: The only garments produced and issued on a large scale were Feldblusen (tunics), Panzer Jackets, M43 style trousers (Keilhosen) and Panzer pattern trousers. In many original photos, one can see camouflage tunics with pleated pockets, bottle-green collars and even a few short, “M44” style jackets. However, these are either modified 44 dot tunics or tailor-made from zeltbahn cloth (and are not actually 44 dot pattern camouflage). There were also a few uniforms made from Oak A camo HBT cloth (Fall side out) in the same styles as the 44 dot uniforms. Small quantities of paratrooper smocks and padded winter uniforms were also made, but actual issue and use was very limited. Those garments were made on heavy cotton twill and rayon respectively.

Wear: The 44 Dot uniforms were issued to all Waffen SS units and were worn concurrently or in conjunction with the earlier smocks and helmet covers. They were worn both on their own, or over the wool uniform.

limited stock on hand: email to inquire about availability or please allow 4-6 delivery

$99.95
Add to cart
Compare
Wishlist
Back to Top